An entertaining story about finding out who you really are and being true to yourself, and learning to stand up to prejudice and criticism. 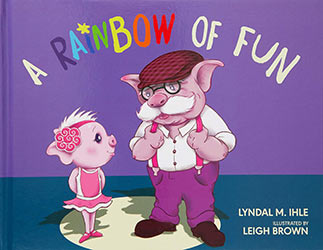 Penny the pig loves all colours, and has filled her bedroom full of rainbows. Her parents keep the door closed, and Grandma won’t go in because “pigs like PINK…they always have and they always will”. But Grandpa tells Penny that she doesn’t have to be like everyone else.

At Penny’s dance recital, the audience is brought to a shocked silence when Penny inadvertently reveals her rainbow underpants. In an act of allegiance and courage, Grandpa steps on stage and reveals his boxer shorts, also covered in rainbow stripes,  and the like-minded pair dance together.  No one claps at the end, but Penny and Grandpa don’t need the audience’s approval – they know they are stars! Their dance routine encourages other pigs to admit they secretly like other colours too.

This book acknowledges that not everyone will applaud the person that shows their true colours, which is a realistic message. Penny had the strength to stay true to herself, and she will hopefully inspire readers to do the same.

There are some useful ‘reflections and activities’ notes at the back of this book.