There was once a little boy whose teeth would chatter in fear at night because a monster lived under his bed. 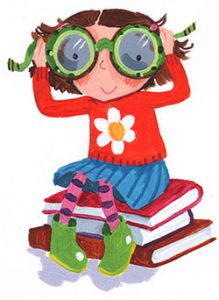 His mother, who had once read a very large manual on how to deal with monsters, thought the solution to this particular problem was to explain to the boy that the monster wasn’t real. But the monster was very real to the boy.

Now this boy loved stories, and while he often found it very difficult to listen to the advice his mother gave him, he would always listen to a good story.

So his mother went off to the library to find a picture book that might help him deal with the delicate issue of the beast beneath his bed. Sadly there wasn’t a ‘helping children to be less scared of monsters’ shelf. There were lots of beautiful and brilliant books, though, with lots of intriguing titles, but she had no idea how any of them helped children.

Then she had an idea. What if she could invent a machine that matched stories to problems? Would it help monsters to vacate bedrooms, or a visit to the dentist less nerve-jangling? Would it make moving house more exciting rather than overwhelming?

The mother put a pencil behind her ear and went into her shed for quite some time. Whirring and banging noises were heard early each morning. 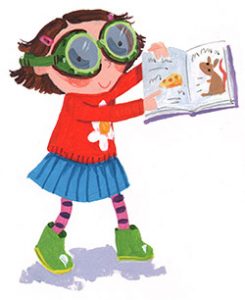 Then one day, she came out of the shed to unveil her new invention. She was wearing what looked like an ancient pair of flying goggles, embellished with buttons and dials. She explained to the small boy, and his smaller sister, that these were Parachute Goggles. When charged up and switched on, they allowed the wearer to clearly see the parts of story books that helped children. The messages, that had been hidden beneath the story as if they were written with invisible ink, shone out with the help of this new contraption. The enlightening words that soothed and comforted them, the pictures and ideas that showed them that they were not alone, that things will get better, and that there is always hope.

With the help of the Parachute Goggles, the family picture book collection (which had just been an innocent looking row of books up until then) was suddenly brimming with messages of hope and helpfulness. There was one particular book that apparently offended the under-bed monster so much that he was gone by the next morning.

Over breakfast, the children said to their mum, “Could you go back in the shed and make a pair of Parachute Goggles for everyone, so all children can make their bookshelves helpful too?”

So she did.
and Little Parachutes was born.