Encourages young children to believe in themselves and to persevere. Promotes resilience and higher self-esteem. 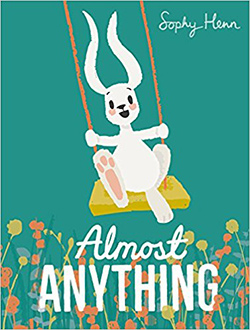 “…when you give your magic a chance, you can do almost anything.”

George the rabbit’s friends are busy doing all sorts of activities: skating, painting, dancing, playing skittles and flying kites. George is reluctant to join in, believing he doesn’t have what it takes to be good at such things, so he sits and does nothing instead. Clever old Bear makes him a ‘magic hat’ from folded paper which allows the wearer to do almost anything. George tries rollerskating, and immediately takes a tumble, and Bear crucially explains that sometimes the magic takes a while to work, and it’s important to have another go. With a little more practice (and the self-confidence a ‘magic hat’ can bring), George masters roller skating and discovers he is actually rather good at lots of other things, too.  When George loses his hat, he believes he has also lost his new-found skills, until Bear gently explains that the hat was just folded paper and the real magic came from him.

Sophy Henn’s charming illustrations combine skilfully with her clever storytelling to make an incredibly appealing picture book with some really useful messages for children about not giving up and believing in yourself.