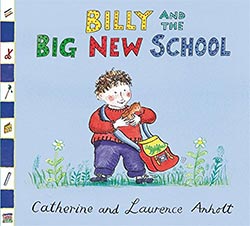 Billy is starting big school next day and is very nervous. He worries about all the things that might go wrong. Going into the garden he finds a tiny sparrow being picked on by the other, larger birds and he and his Mum take it into the house to look after. Next morning Billy finds the bird has recovered and he lets it go. School isn’t nearly as scary as he expected and he makes friends, and is even brave enough to tell the class about the tiny bird. A few days later, playing with his new friend in the garden, Billy sees a sparrow just like the one he had rescued but this one is bigger and braver and has lots of friends just like Billy.