A good choice for a child who is facing a hospital stay or a significant operation, it introduces many aspects of medical treatment and recovery that children with serious health problems may face 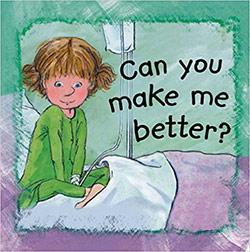 This story is about a little girl called Rosie with a heart problem who has to go into hospital for a major operation.  The story begins as she arrives in hospital and is checked by a doctor (who reassures her that they will look after her there) and ends as she packs her bags to go home, after a long recovery period at the hospital. It is written in minimal, simple language that young children will understand.

Rosie is told she can take her favourite toys to hospital with her. She likes her big hospital bed. A slightly tearful Rosie has blood taken (this is shown in the illustration) and also has a pre-med injection in her bottom. After the operation (the vagueness of being under a general anaesthetic is shown with abstract floating spirals and objects in the picture), Rosie feels dizzy and she notices a big plaster on her chest, concealing a large scar. Teddy has a plaster too. As Rosie recovers from surgery, her blood pressure and temperature are checked every day, and her breathing is checked as she blows bubbles. Her scar sometimes hurts. She is weak and tired, and has lost her appetite, but she slowly begins to feel stronger. She makes a new friend and is allowed to get out of bed sometimes to go for a ride in a pushchair. She enjoys making pictures and seeing visitors, who bring her lots of presents. She has x-rays taken and the doctor listens to her heart, and decides she can go home. Rosie packs her bag and mum makes her a special chocolate cake.

Written in a clear, reassuring way, which doesn’t shy away from realism.  While the text remains quite factual, the illustrator’s skill at conveying emotion has breathed life and personality into the character of Rosie. The doctor’s and nurse’s body language is very caring and nurturing, and although quite a few medical procedures shown are shown, these are not depicted in an alarming or insensitive way.

The book features some quite graphic depictions of Rosie’s medical treatment: her large chest scar, attached to a drip, and having injection in her arm (she is crying).
When Mum explains that Rosie’s operation scar will fade, her brother says, “If the scar wasn’t there, you wouldn’t be there either!” – quite a startling acknowledgment of the seriousness of Rosie’s condition.