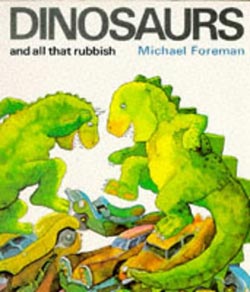 A man stands on a hill and dreams of reaching a far away star. He builds a rocket to reach the star and in doing so he pollutes the land surrounding him. When the rocket reaches its destination, the man is disappointed to find nothing of interest there, but he spots an interesting looking star in the sky. He sets off towards this. Meanwhile back on Earth, the long-dormant dinosaurs are woken by the heat of the smouldering rubbish left by the man. They set about cleaning the Earth and restoring it to its former glory. The man arrives back from his journey, unaware that he has returned to his own planet. He claims this ‘new paradise’ as his own. The dinosaurs explain that Earth does not belong to one person, but every living creature, and that it is all the inhabitant’s collective responsibility to care for it.

Despite the fact this book was first published in 1972, it is very topical and not at all dated. A strong environmental/ecological message.