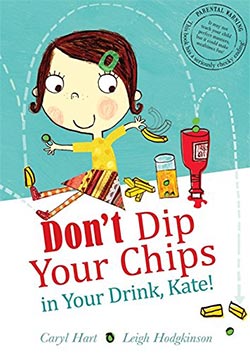 Kate’s mum constantly tells her that she should have better table manners. But Kate stubbornly continues to play with her food, wipe her nose on her sleeve, use her fingers instead of her fork, slouch and tell jokes about bogies at the table. She is sent upstairs in disgrace. Exasperated, she writes a note to the Queen asking her advice on eating and being polite. The next morning, a footman arrives with an invitation for Kate to have tea with the Queen at the palace. Her mum says she can’t possibly go because of her appalling manners, but her brother Fred patiently runs through the rules with her (no slurping, slouching, burping, grabbing, and so on). Kate repeats the rules as she’s driven to the palace but gets them all mixed up in her head. On arrival, the Queen takes her to the kitchen fridge and grabs handfuls of wobbly jelly. She gobbles it down greedily and wipes her hands on her dress. They start tea with pudding first, on the Queen’s request. Kate asks if it’s good manners to eat in this order, so the Queen checks the ‘Royal Rules’ (which happens to be the same list of rules that Kate has been trying to remember). The Queen admits that she finds the rules very dull and just wants to have fun. The two girls have a big food fight, followed by a cherry stone spitting contest, then lick all the jam out of the doughnuts. Kate concludes the story by saying, “So if your family’s strict about manners, Even though they can see you’re not keen, Put up a fight, show them who’s right, And send them to tea with the Queen’.

Worth noting: There's an extra poem at the end of the story which warns the reader that although the story is fun, it's wrong to have bad manners (although once in a while it's OK to forget manners, relax and have fun).