This non-fiction picture book introduces children to the concept of respect, fair treatment and anti-discrimination. It explains that you can earn respect by being polite, honest and by listening to others: qualities that will ultimately lead to making the world a better place. 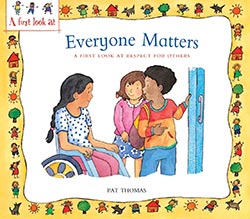 An important part of the book explains how bullies often try to force people to respect them despite having done nothing to deserve this respect. But being scared of someone isn’t the same as respecting them. The book defines one aspect of respectfulness as treating people as your equals despite any differences you may have, and not making fun of people who aren’t the same (one of the illustrations shows a girl being teased for wearing glasses). Having respect for others also means keeping promises, being polite and honest, listening well and being loyal. But it doesn’t mean we can’t disagree or have our own opinions (as long as we respect other people’s views). The book concludes by explaining how we all need to practice showing respect every day in order to get better at it, and if we all try to respect each other the world will be a happier place.