The story would be a good starting point for a discussion on self-esteem and persistence, or the positive side of being different. It also has an anti-bullying/acceptance message. 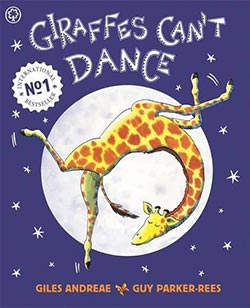 Gerald was a very self-conscious giraffe; he was painfully aware of his gangly legs which made him stumble and trip when he tried to run. So when the time for the annual Jungle Dance came around, he felt very sad at the prospect of his dancing skills not being up to scratch. The other animals all performed flawless routines. Gerald bravely walked towards the dance floor, but was halted in his tracks by the other animals teasing him about his dancing. He crept off into the jungle, feeling useless, sad and lonely. In a beautiful moonlit clearing he met a cricket, who politely explained to him that “sometimes when you’re different you just need a different song”. He told Gerald to listen to all the beautiful natural sounds around him and to imagine the moon was playing just for him. Accompanied by the cricket’s violin, Gerald felt the urge to move and performed the most spectacular dance. The other animals arrived to watch, and were amazed by Gerald’s miraculous abilities. When they asked him how he was able to dance so well, Gerald replied, “we all can dance…When we find the music that we love.”

We loved the humorous rhyme that this book is written in, and the positive moral messages.