Introducing young children to some typical aspects of a stay in hospital, including an operation. 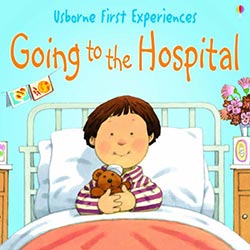 Ben Bell is not feeling very well. His ear aches as it often does. Mrs Bell takes him to see Doctor Small who checks his ear using an otoscope. He tells Ben that he needs to have an operation at the hospital to make his ear better. On arrival at the hospital Ben’s mum helps him to change his clothes and unpack. He is not allowed to eat anything for six hours. The illustration shows a busy happy children’s ward. Ben meets the nurse who checks his temperature, pulse and blood pressure. The surgeon arrives and explains what he is going to do and listens to his heartbeat (Ben’s family are with him in the illustration). Ben is wheeled down the corridor for his operation with his mum beside him. He breathes in some special gas and sleeps soundly. When he wakes up the operation is complete and he is back in his bed surrounded by his family. His ear is a bit sore. As he recovers, he plays in the play area and eats with the other children. The rest of the family come to visit and Ben shows his granny his bandage proudly. She tells him how brave he’s been and gives him a toy car. By the time Ben goes home, his earache has gone. He gives the nurse and surgeon some flowers and says goodbye.