Although predominantly an entertaining story, this quirky picture book also explores the idea of being true to oneself and defying stereotypes. It reinforces the message that you don't need to 'go with the crowd' if the crowd's actions are not wise. 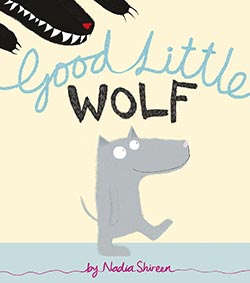 Rolf is a good little wolf who likes gentle activities like baking, helping his friends and being kind. His best friend, Mrs Boggins, warns him that not all wolves are as good and kind as he is. When a Big Bad Wolf meets Rolf, he is intrigued by the odd creature before him that looks, smells and feels like a wolf but is reluctant to do the ‘bad things’ that he believes all ‘real wolves’ do. Big Bad Wolf wickedly suggests that Rolf proves his wolfhood by eating poor Mrs Boggins. Rolf chooses the more humane option of ensnaring the bad wolf in his best friend’s knitting yarn. This kind act gives Rolf the confidence to realise he is a wolf after all….he just happens to be a GOOD one. The wolves and Mrs Boggins sit down for a celebratory tea, and Rolf requests that the bad wolf to stop eating people. He agrees to ‘begin first thing tomorrow’ (the illustration shows him sitting with his cup of tea rubbing his enormous belly after he has gobbled up Rolf and Mrs Boggins!)

Rolf is such an endearing character. We loved the fact that he found the inner strength to stay true to himself. There is a great deal of humour in the illustrations and the very differing personalities of the wolves shines through. This book is a real page-turner which our test readers requested over and over again.