To comfort a child who has lost a loved one. It may be a good starting point for a discussion about bereavement and grief. 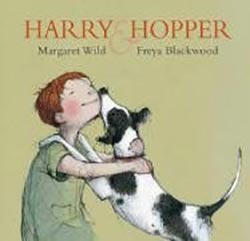 Harry and his dog Hopper have done everything together, ever since Hopper was a jumpy little puppy. But one day, when Harry returns from school, his father explains that the unthinkable has happened: Hopper has been killed in an accident. Harry’s grief manifests itself in a number of ways: he becomes very withdrawn and refuses to help to bury his beloved dog. He doesn’t want to sleep in his own bed (he used to share it with Hopper), so his father makes him up a bed on the sofa. Harry also chooses not to tell his school friends about his loss. He descends into an imaginary world where Hopper visits him at night, and the two friends play together in the moonlit garden. When Harry wakes up he is unsure whether or not Hopper’s visits are a dream as they feel so real. Harry confides in his father, who simply tells him he can stay sleeping on the sofa for as long as he likes. Hopper makes one last visit to Harry. He appears, ghost-like and weak, under his window late at night, and Harry settles him on his pillow and says goodbye to his beloved pet.

Things we liked: Freya Blackwood's illustrations are stunningly beautiful, perfectly reflecting Hopper's bouncy nature and the strong emotions in the story. A beautifully written and sensitive story.
Worth noting: Some children may be confused by the fact that Hopper 'comes back to visit' after his death. This may cause a grieving child to mistakenly think that their lost loved one will come back to visit them. This is something that may be worth clarifying to the child.