Children who dislike having their hair brushed, washed or cut may identify with the boy in the story. 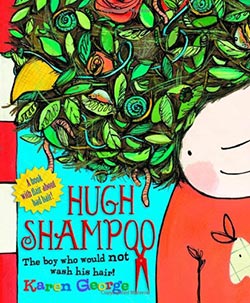 Much to the disappointment of his salon-owning and beautifully styled mother and father, Hugh Shampoo loathed having his hair washed, cut, combed, brushed or fussed over in any way. When his parents are selected to be finalists in the ‘Scissor Showdown’, Hugh longs to be part of the team, but not if it means having his hair washed! However, when disaster strikes and the team’s selected hair model can no longer compete due to an unfortunate accident with a pair of garden shears, Hugh and is messy mop become an unlikely replacement that is highly praised by the judges as an artistic masterpiece. Team Shampoo win The Cup, and Hugh finally allows his parents to tame his tangled tresses.

This is a really visually appealing picture book and the story flows well and is fun to read.