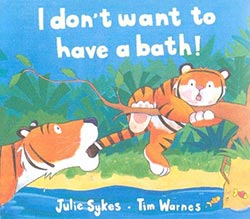 Little Tiger loves to play exciting games and get messy and dirty, but is far less keen to wash afterwards, refusing to take the baths in the river that his Mummy requests. His other animal friends are much more compliant and go off for their baths when asked to by their parents, but Little Tiger still stubbornly refuses. Left with no playmates available at bathtime, he wanders into the jungle and is awestruck by the beauty of a passing peacock. He asks the peacock to play with him, but he refuses to get near the grubby little tiger for fear he would spoil his feathers. Tiger, feeling hurt, returns to the river and is surprised to see his dirty face reflecting back at him. He topples into the water, and soon realises that having a bath can be fun. He wants to make his Mummy proud of him by taking more pride in his appearance. At the end of the book, he turns down the chance to play with little Leopard as he’s much too grubby and may spoil his lovely clean fur!