This 'kid-to-kid guide to keeping private parts private' teaches children to recognise the threat of sexual abuse, and to tell a trusted adult about it. For children who have been victims of abuse in the past, it will acknowledge their feelings and help them to realise they are not alone. 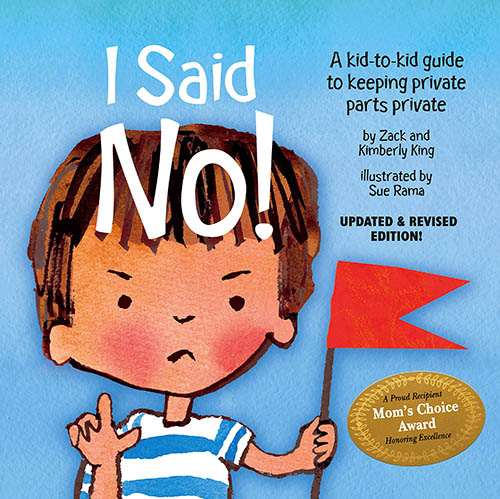 This picture book  is packed with information  to help children recognise potentially abusive situations and suggests straightforward ways that they can help protect themselves. It is narrated by Zack, who is credited as the co-author alongside his mother Kimberly.  Zack’s experience of being the victim of attempted sexual abuse at a sleepover prompted the mother and son to write and publish the book.

An explanation of which parts of the body are private parts is provided. Zack clearly states that ‘privates should be private’,  although some exceptions are mentioned (eg, checkups at the doctor, parents wiping children’s bottoms during potty training).

The authors have used the metaphor of red and green flags to help children to think about and recognise safe and unsafe situations. When a parent, caregiver or doctors touches you while they are taking care of you, these are  ‘green flag’ situations, whereas a ‘red flag’ should be raised if anyone else (including a friend, brother, uncle, aunt, cousin, teacher, coach, babysitter or stranger) touches you in a way that make you feel ‘upset, uncomfortable, lonely, sad, angry scared, yucky, or in danger!’. Children are encouraged to act clearly, confidently and decisively in red flag situations, saying NO, getting away as quickly as possible, and telling a trusted adult.

There are some pages devoted to making children aware of some of the behaviours that an abuser may display in order to stop a victim telling someone else, such as offering bribes or making threats (many scenarios and examples are given). It is strongly emphasised that you shouldn’t keep what is happening a secret, even if the abuser insists you should. There’s also some advice about what to do if you are being coerced into watching inappropriate videos/online content.

“Get the heck out of there” and “Tell someone you trust” are two of the most important and clearest messages conveyed to the reader in this direct, honest and carefully-considered picture book. Sue Ramá’s non-threatening, non-explicit illustrations are pleasant and well-matched to the tone of the book.

(This book was purchased from our picture book wish list by one of our generous supporters).