Promoting tolerance, co-operation and acceptance and celebrating diversity. May help to boost a child's self-esteem and realise that being different isn't a negative trait. 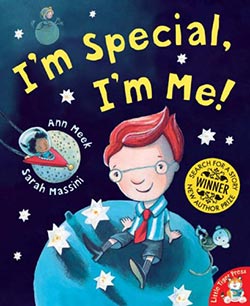 Milo is sad as his classmates have different ideas to him about what roles he should play in their playground games. Milo wants to be a lion but is told he is not strong enough, and has to settle for being a monkey. He asks to be a pirate Captain but is only big enough to be a deck hand, and is told he must be a Knight as he’s not handsome enough to be a prince. His request to be an astronaut also falls on deaf ears as his classmates think that his glasses wouldn’t fit behind the helmet. Milo’s mum helps him to look at the positive side of the situation, and tells him how fantastic it can be to swing through the trees, look out for treasure from the ship’s rigging, or be a brave knight rescuing people from dragons! She reassures him that it’s fine to be different and that is what makes him special. The next day Milo has the confidence to choose his own role in the playground game, and his friends all congratulate him on his great idea.