Children with a baby brother or sister may identify with this story, which acknowledges the advantages and disadvantages of being the older sibling. 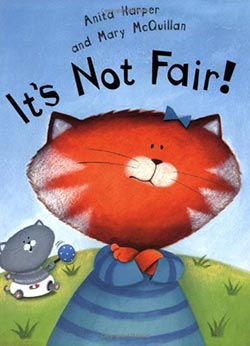 The central character in this picture book (a young cat) feels that lots of things about having a new baby brother are just not fair. The baby is fussed over and looked after by everyone, and is allowed to make mess and noise. As the ‘big girl’, she is expected to play independently, tidily and quietly, to which her response is, “it’s not fair!”. As her brother grows, she slowly begins to realise that being the older sibling can have its advantages: she is allowed to walk in the rain while her brother is cooped up in his pushchair, she can stay up late, slide in the snow and go to playgroup and parties. When her brother learns to talk, he looks at the things his sister is doing and says, “It’s not fair!”

We liked the way the book reflects the frustration and jealousy older siblings can experience as they adjust to the change of a new baby in the household. Mary McQuillan's lovely illustrations show the brother and sister slowly bonding with each other.