In this charming picture book, a group of children (including Leigh, a wheelchair user) work together to support each other to make costumes for a school event. Leigh is struggling with feelings of self-consciousness and frustration, but he successfully overcomes this. 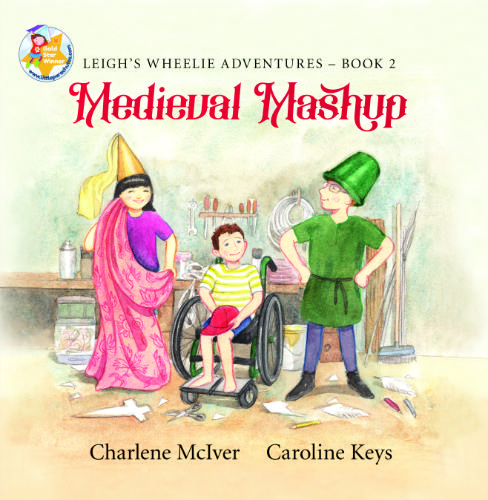 While children living with a disability may recognise some of their own experiences, challenges and feelings in this story, ‘Medieval Mashup’ is a great choice for any child. It encourages everyone to support and work in harmony with their friends, and to find the strength to be proud of their own unique identity.

Friends Leigh, Tara, and Cosmo are keen to make costumes for their school Medieval Fair. Leigh has his sights set on first prize, so the enterprising trio head  to his dad’s warehouse to see what they can make use of. The children co-operate well and the costumes begin to take shape, but something is clearly bothering Leigh. He is frustrated by his friends’ suggestions for his outfit; he is worried that being a jester will make him look silly. He becomes anxious when another costume prototype restricts his movement and makes it hard for him to move in his wheelchair. He really wants to be a knight in shining armour, but gets angry and frustrated with his friend’s suggestions on how to realise his idea.

Leigh storms off, but after a little thinking time, he realises that he’s been silly (‘but not in a fun way’). It transpires that he feels like this because he spends every day looking different from his friends, while he just wants to come across as being brave and strong, just like a knight. By overcoming his self-consciousness and embracing his personality and differences, he shows true strength and bravery, just not exactly in the way he first imagined…

Once again, author Charlene McIver has woven an engaging and helpful story together featuring genuinely likeable and realistic characters, which are further shaped into life by Caroline Key’s beautiful watercolour and pencil illustrations.

The story was written as a dedication to the author’s late son, Leigh, whose life provided the inspiration for the story and the central character. This is the second book in a series following Leigh’s adventures – we have also reviewed the first book –  Squishy Sand. You can find out more about Charlene’s  writing on her website.