Mighty Mara celebrates diversity and also explores themes about tenacity, self-confidence, and disability inclusion. The protagonist, a young disabled girl, encounters doubt and some bullying when she signs up to perform in her school talent show. Readers will see how she overcomes biases and ableism to embrace what makes her uniquely herself. 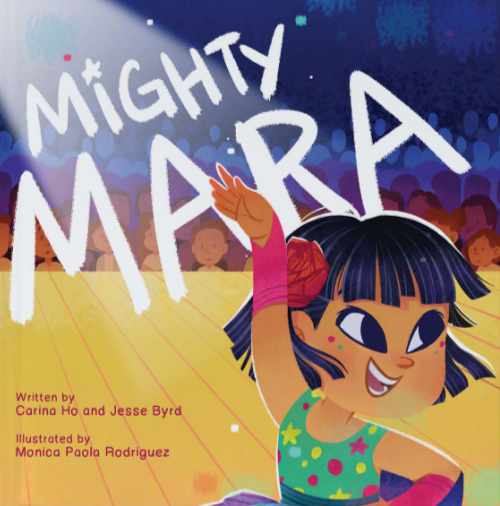 Mara is a resident of Sametown, a place where everyone chooses to do the same things in order to fit in. But Mara dances to a different beat and stands out from her peers. She wears beautiful bright colours, performs unconventional and enthusiastic dance routines, and is a wheelchair user (this is not revealed until half-way through the story). She has always struggled to fit in and dreams of being accepted for what she is.

After watching a TV show where a girl finds confidence and acceptance through her dance abilities, she decides to sign up for the school talent show, in the hope that she can show the world what she is capable of. While she has confidence in her own abilities, she is bewildered why others can’t recognise her dance talents and appreciate them. Her classmates are impatient with her, dismissing her moves as ‘flapping about’. Even her teacher tries to talk her out of performing, encouraging her to stick to what she believes she is best at (maths). It’s all too much for Mara to take in.

After a helpful chat to her mother, who consoles her and reminds her that she has nothing to prove to anyone, Mara summons up all her courage and makes her way to the show. The other kids help her scale the stage steps in her wheelchair, and she performs her incredible routine. At first the audience are silent, but gradually, enthusiastic applause breaks out.

Mara doesn’t win the contest in the end, but succeeds in far more important ways: she has proved that with determination she can achieve great things, and she gains more respect and acceptance from the people around her.

The story unfolds in a child-friendly way, written predominantly in simple dialogue. As a reader, you really feel for the likeable and honest Mara and recognise the highs and lows that she is experiencing. Monica Paola Rodriguez’s striking illustrations compliment Carina Ho and Jesse Byrd’s words well and relate some of the important elements of the story, such as the sadness Mara feels when her teacher doesn’t encourage her. Mara is shown in brilliant bright colours, which contrasts strongly with the muted pastel shades used for the rest of Sametown. This positive yet realistic portrayal of a young girl’s struggles for acceptance and support would be a welcome addition to any child’s bookshelf.

There are some useful questions provided at the end of the book to prompt further discussion (for example, ‘Why do you think that Mara doesn’t fit in in Sametown?’)