A good choice to help a child develop a positive body image, “Minnie & Max are OK!” sends out a strong message that everyone is different and that we all have our own specific strengths. The book will reassure a child with insecurities, and encourage them to look at the wonderful diversity all around them. 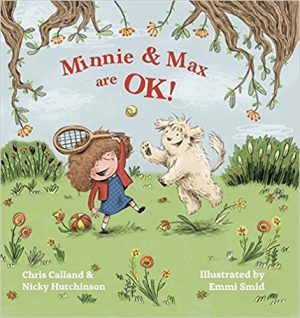 Minnie and her dog Max enjoy playing together. They never sit still!

After school, when Grandma and Max pick her up, Minnie usually greets Max as he jumps up, saying “Relax Max!”, and she tickles him behind the ears. Then, on the way home, Minnie asks Grandma all kinds of questions, and Max thinks up a few of his own.

But today, things are different.

Minnie walks home quietly, and Max only asks himself one question:  “Why didn’t Minnie say “Relax Max!” and tickle my ears?”

Grandma notices, too.  She asks Minnie if anything is wrong.

“Yes”, says Minnie. Then she explains how two girls hadn’t let her play with them, and they also told Minnie she looked silly. Minnie has been worried about this all day.

Grandma suggests a visit to the park on the way home. Minnie smiles and says “Yes please!” and Max is cheered up, too. He wags his tail.

On their way to the park, Minnie catches sight of her reflection in a shop window. She sees a small girl with a mass of brown curly hair and worn out shoes. This makes her sad.

Max sees his reflection, too, and notices his short legs and scruffy, biscuit-coloured fur.  Both Minnie and Max then spend some time wishing they were different. Minnie wants to be tall like Samir, and have straight hair like Ella. As for Max – he wishes he was a poodle.

Grandma laughs at the pair of them, trying to be something they’re not, then cleverly suggests they go to the café for a drink. Over a milkshake, Minnie admits to Grandma that she doesn’t like the way she looks. Meanwhile, Max is envious of every dog that goes by, for one reason or another.

Grandma takes Minnie in her arms and tells her that she loves her just exactly the way she is, and that people come in all shapes, sizes and colours.

Max notices the same with all the dogs there, too!

Grandma encourages Minnie to think about how boring it would be if everyone looked the same.

Then, Minnie spots Samir and Ella, her friends from school. She and Max run off to play. They have such fun making up new games. Ella is the fastest at “Can’t Catch Me”. Samir has the fiercest growl when they play “Bears in the Forest”. Max excels at “Max in the Middle”, and as for Minnie, she is fantastic at being a monkey in the game called “Monkey Trees”, but she is even more brilliant at inventing games to play. The friends have a lovely time together.

When it’s time to go and Grandma is opening her purse to pay at the café, she notices the old photograph of Minnie’s dad that she keeps in there. He looked just like Minnie does now! Minnie peers at the photo and then at Grandma’s eyes, noticing that hers are exactly the same colour.  Bending down to Max, Minnie tells him proudly that she looks just like her dad and her grandma, prompting Max to think thoughts of how he must resemble his parents, too.

The three of them head home happily together, with Minnie asking Grandma all sorts of questions, and then she and Max start to sing. Grandma pretends not to like their singing. “Oh noooo,” she says.

Minnie laughs and bends down to scratch Max, and tells him that she liked being a monkey in the game, but actually, on reflection, she prefers being herself.

The illustrations in the book are busy, colourful and very appealing. They complement the story brilliantly.
The relationship between Minnie and Grandma is beautiful.
Minnie & Max are OK! is a delight, and sends out a very positive message to its young readers.

There is a very useful section at the back of the book entitled “Suggested questions to help children explore the topic further”. This is a great resource, and covers teasing, appearance, family resemblances, diversity, our amazing bodies and celebrating the things we are good at. There is also a reference made to adopted children, and those in care, and how researching a family resemblance may help such children to develop a sense of identity.