This story tackles the fear of the unknown, and helps a child to consider that situations they might initially think are scary can turn out to be harmless, and even enjoyable. It also challenges prejudice. 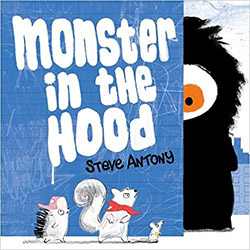 Three friends (Sammi Squirrel, Henri Hedgehog and Marvin Mouse) have all heard about the “Monster in the Hood”, and how scary it is. They want to see the monster for themselves, and set out to find it. On their journey, the three companions come across hordes of animals, running away from the monster in the other direction, hollering warnings and stampeding in fear. The three friends are getting closer to the monster, and hear strange, frightening noises, but still they advance. They encounter more terrified groups of fleeing animals along the way, who continue to warn of how scary the monster is. The trio continues bravely on, until the scary noises stop… The monster has found them. It looks like the other animals describe it – but it doesn’t behave in the way they feared. It is not a scary monster, but a lonely one, and all it wants is friendship. The animal trio welcomes the monster and they play happily together, until the monster announces that it’s hungry… so they all go to a café.

The illustrations in this book are clever in the way that they introduce the monster slowly, as it creeps up on the three animals. This makes the story rather exciting. It is particularly effective when the whole page is taken up with the monster, who is quite eye-catching in his own way!

The fear comes from those around the trio – they themselves are the brave ones who go to find out about the monster for themselves, regardless of the rumours, and ultimately reap the benefits of finding a new friend.