This appealing and witty picture book has a very important central message for children: you don't have to be like everybody else - be who YOU are. 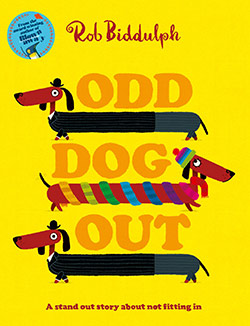 The story is set in a bustling city full of Daschunds, who all look the same and act the same, at work and at play. All except one, our protagonist and hero, who ‘dances to a different beat’.  She likes to do things her own way, whether it’s her choice of transport (a bike instead of a car), sporting techniques (throwing rather than kicking the ball), choice of musical instrument (electric guitar rather than violin). Her distinctive woolly hat and long stripy scarf ensure she never blends in with the crowd. In the middle of the story, the reader is suddenly made aware that ‘not fitting in’ really does upset her, and she tearfully decides to leave the city. After much walking, she happens upon the city of Doggywood, where she is surprised to find she DOES fit in – every dog looks and acts just like her.  All, that is, except one: another ‘Odd Dog Out’. She is keen to sympathise with this outsider, but he tells her she has got it all wrong. He LOVES to stand out from the crowd, and despite his differences, still feels like he belongs. The turning point in the story arrives  – the other odd dog encourages her to be proud of her differences – and she realises that it’s absolutely fine to be herself. Off she goes towards home, and arrives to a hero’s welcome. They’ve missed their Odd Dog Out, and this has made them realise that ‘being different is really great’, in fact, some are inspired to behave and dress differently themselves.

This is a very appealing book which should engage and entertain young children. Rob Biddulph’s vibrant illustrations are a real delight, with lots of details to pore over. Children will enjoy finding the ‘odd dog’ in the pictures and ‘spotting her differences’.

The story doesn’t feature any teasing, bullying or animosity – the ‘odd dog out’ is aware of how different she is, but the other dogs do not provoke or criticise her for being different, or even point those differences out. When she returns from her time away, she is greeted warmly, and she is told how much she has been missed. If a child has been experiencing teasing or bullying because of their differences, they may feel the positive and supportive community in the story doesn’t reflect their own experience. This is something that a parent may wish to chat about after reading the book. The ‘blaze a trail’ and ‘be who you are’ messages in the book are important and valid ones, however, it’s worth keeping sight of just how challenging it is for a very young child, whose emotional intelligence is a long way from being fully developed, to not just follow the crowd.