Highlighting that adopted children are loved unconditionally and differences between the child and the parent are not important. 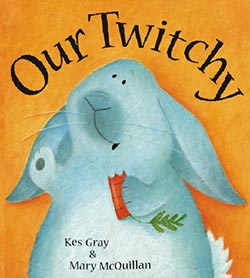 Twitchy the young rabbit wonders why his parents don’t hop as he does. Twitchy is shocked to find out that his ‘Bunnymom’ and ‘Bunnypop’ are actually his adoptive parents (his mother is actually a cow called Milfoil and his father is a horse called Sedge). They explain to Twitchy that his birth parents had too many children to look after so they took him in and gave him their love. Twitchy is confused – when he looks at his and his parent’s reflection in the water he sees their similarities (like their big brown eyes) and not their differences. He is so upset that he runs away from home. His distressed parents search everywhere for him, until they hear some ‘mooing’ and ‘neighing’ coming from an old railway tunnel. Twitchy has tried to make himself more like Milfoil and Sedge by pinning his ears up, covering his fur in brown mud and tying a twig to his tail. He begs them to be his ‘real parents’, telling them he can change to be like a horse and a cow. They explain that they are his parents and they love him exactly as he is, no matter what. They all tuck into a carrot dinner together!