"Find the courage to be yourself" 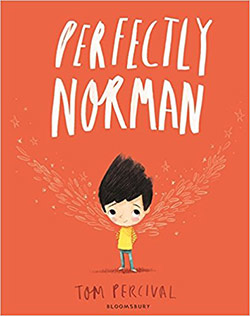 Norman was a perfectly normal boy, until the day he grew an extraordinary pair of wings. Swooping high into the sky turned out to be, naturally, the MOST FUN EVER, and for a while life was joyous and carefree for young Norman. That is, until he started to worry about how other people would feel about his amazing wings. So he carefully tucks them under a big coat, out of sight of his friends and family. Norman starts to decline into misery, stifled in his thick coat and unable to join in with the other children’s fun and games. Following an emotional run-in with a bully, Norman has an epiphany: he realises that it is his coat, and not his wings, that is making him miserable. With some gentle persuasion from his parents, he casts off his coat and unfurls his beautiful wings, uninhibited and happy once again. His brave act emboldens his friends, and suddenly there are coats being discarded all around him and the sky is filled with delighted winged children. Norman has discovered that there is no such thing as perfectly normal, but he is perfectly Norman, which is ‘just as it should be’.

This is a stunningly beautiful picture book with a heartfelt and uplifting message at its core. The story has been crafted with great love, care and thought by Tom Percival, who has perfectly captured Norman’s emotional struggles. Use of colour, or lack of it, is significant: when Norman hides his wings, he suppresses his natural joy and happiness. As he smothers his wings under his coat, Norman’s world turns grey and distant; when he finds the courage to reveal his wings, beautiful colours explode once again from the pages.

Adults and children alike will instinctively urge Norman to reveal his wings and take to the sky. I admit that tears pricked my eyes when I saw the children flying together, the symbolism evoking memories of feeling at odds with ‘acceptable normality’ during my own childhood.

The reaction that Norman gets from his friends is a very positive one. Some children who summon up the courage and confidence to reveal their differences are not met with such understanding and support. Their peers may comment on those differences in ways that are hurtful, even if they don’t do it intentionally. Parents may wish to use the book as a starting point for a discussion about hurtful words and actions.