This story provides a mildly abstract way of explaining the arrival of a premature baby to a child. It may help the young reader to understand that pregnancies don’t always go to plan, and a very early baby may need a lot of special care in hospital, instead of being able to come straight home. It may also be of interest to a child who was a premature baby him/herself. 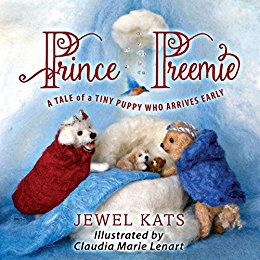 We are introduced to a king and queen, a happy royal dog couple, who are expecting their first child. They are naturally very excited and expectant, and cannot wait for Prince Puppy, as they have named him, to arrive. Many preparations are made, and a special crown is commissioned for the new baby prince. But long before Prince Puppy’s due date, the queen starts to feel there is a problem, and so she and the king rush off to the local hospital. Once there, a doctor examines the queen, and realises that the little prince will be born soon – and sure enough, the baby comes that night. Once the news of the birth spreads, the palace horns sound to herald the prince’s arrival. But the king and queen can’t rejoice – their son is small and vulnerable, and needs medical help at the hospital. There is much gossip in the kingdom about the new baby, and folk speculate on the baby’s suitability as a prince, if he is too small to wear a crown. The new baby needs special care, and is placed in an incubator and fed through tubes. The king is sad, because he can’t take his family home. The queen is also sad, and refuses to talk to anyone. The king has to return to the large, empty palace on his own. He telephones the makers of the crown he’s commissioned, and asks if it is ready – but it isn’t. His son has been born too soon, and he doesn’t have a crown that fits. The king retires to bed, dejected. He is restless, and as he tosses and turns he is poked by the queen’s knitting needles that happen to be laying there. This gives the king an idea! His spirits are raised, and he gets to work… The king visits the queen and their baby every day, and soon, they become used to caring for their son in the hospital. They become happier, and all the while, the king is working on that special, secret surprise. One morning, the queen wakes at the hospital to find many reporters outside her door. She doesn’t understand what the fuss is about. But when she goes to the special unit where the baby lies in his incubator, the king takes her hand, and turns to the reporters, declaring that soon, there is to be an announcement. At that moment, a nurse comes in bearing a tray on which the king unveils a tiny, knitted and bejewelled cap. He ceremoniously places it on the baby’s head. Then, he announces to the assembled reporters that the baby is to be called “Prince Preemie”, and the whole kingdom shall recognise him as such. The queen is overjoyed, naturally, and the reporters cheer. The kingdom is a happy place. And before long, Prince Preemie is strong enough to go home.

The unusual illustrations in this book are charming, and will surely appeal to children. They are crafted from felt, and then photographed, providing a unique and very colourful way of bringing the story to life.

The story of Prince Preemie is an unusual but effective tale, which subtly explains to children how the arrival of an early baby may cause some disruption to family life, and will possibly not be the experience the child is expecting. The overall premise of the book is that the new prince, being early and small, might appear not to fit the role he was destined to fill. But with time and a few adaptations, he grows into it. It’s a simplistic story, neatly told, and does not delve into any longer term issues that might arise from prematurity. It has a happy ending, and thus may alleviate any concerns a child may have about an early baby.