The book shows how being positive about someone can have positive results and can even make a mean wolf change his ways and become a good wolf. 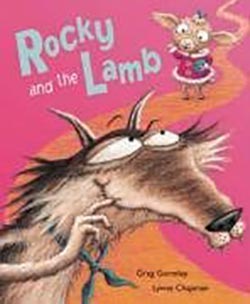 A wolf called Rocky lives behind a boulder on a ‘lonely stony’ mountain pass at the ‘thorny’ foot of a mountain. He is not a nice wolf, he is mean and cowardly, stealing from travellers as they pass by. Rocky hides from the larger animals behind a rock no matter what treasures they carry.

One day he spies a sweet little lamb who he notices is carrying a small box. When Rocky asks what is in the box he is told by the lamb that it is a ‘splendid crown for the king’s birthday’ and that it is guarded by ‘the scariest, hairiest monster you could possibly imagine’. The lamb is polite and brave and makes her way with the box along the path that Rocky deceives her is the way to the palace. The mountainside is covered in thorn bushes which do not trouble the little, light footed lamb, but scratch the deceiving wolf. Then the lamb skips in and out of crashing rocks that land on Rocky’s head and the wolf is left in the middle of a snowdrift ‘right up to his muzzle’.

Lamb finds that there is no palace at the end of the mountain path Rocky had directed her to. Puzzled, she sits down and has her lunch. The crown from the box is placed on a small satin cushion beside her while she eats and Rocky sees there is no monster. The lamb goes on her way skipping back down the perilous route she had taken up the mountainside so easily. Rocky struggles back down following lamb and covered in thorns, bruised and battered he manages to catch up with her and snatches the box. All the time the lamb believes that the wolf is helping her and even when the monster does come out of the box and is the ‘hairiest, scariest monster you could possible imagine’, she still thinks Rocky is good. Rocky promises to be good as he is so afraid of the monster and the lamb tells the monster off, so he goes back in his box and then apologises to Rocky telling everyone about the nice wolf at the palace. Rocky does become a good wolf and is the best mountain guide around.