It shows shyness and being different in a positive way. 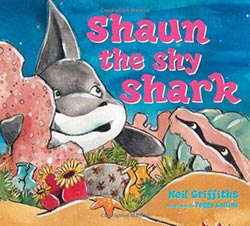 Shaun is not the usual scary shark, he is actually very shy and scared of many other sea creatures. He loves watching all the pretty colourful fish and has a secret: he can dance a beautiful sea ballet. He is seen by some other sharks who are mean to him and call him soppy. This makes him very sad so he swims off to live in a dark old shipwreck on his own. There he meets lots of other colourful sea creatures, who are all shy too and, like him, are different in their own ways. After making friends Shaun opens a treasure chest and is so excited by the dazzling colours and sparkle he starts his dancing, much to the admiration of his new friends who soon join in too. Soon word spreads in the sea about Shaun and his amazing dancing and the shipwreck becomes a popular nightspot for all. Shaun is left happy being different and not quite so shy.

The book is fun and has a brilliant story which all would enjoy. It covers the situation of being bullied sensitively and ends on a positive note with Shaun being happy to be himself.