An entertaining picture book about learning to be happy with what you have. 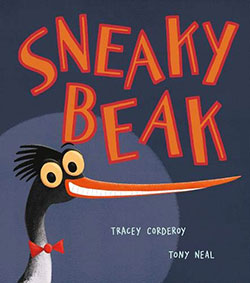 In an age where children are often bombarded with advertising and marketing, this story could open up a conversation about what we feel we want versus what we really need. It also may encourage children to recycle unwanted items.

Hamster’s housemate, Bear, didn’t think he needed a bouncier bed, a bubblier bath or a crunchier granola maker, but that was before the entrepreneurial bird known as Sneaky Beak convinces him they’re to die for with some very persuasive ad campaigns. All the products are purchased and used with hilarious consequences (the gadgets, rather than benefitting Bear, turn out to be useless, messy, and in some cases explosive).

It’s not until Sneaky Beak sells Bear a holiday rocket which blasts him off into outer space that Bear has the chance to consider how silly he’s been to prioritise acquiring new things over spending time with his best friend Hamster (who he misses terribly). Reunited, the pair decide to recycle the unwanted purchases, and Sneaky Beak is sent packing too!

Gorgeously illustrated by Tony Neal (who is just brilliant at injecting the characters with emotion and humour), this would be a lovely book to share at bedtime with any child who has felt the magnetic pull of owning the latest toy or gadget.