This is a skilfully written and beautifully illustrated book which covers the subject of keeping young children safe from sexual abuse. Written as a tool to help parents, caregivers and teachers broach the subject in a non-threatening way, it sensitively weaves the important facts into a story that young children will find accessible. 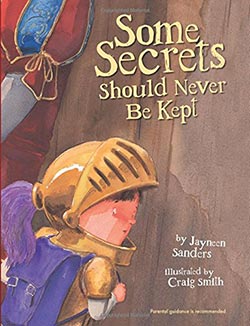 Some Secrets Should Never Be Kept is a story about a little boy who is sexually interfered with by an authority figure. This is his story and relates how he finds the courage to tell his mother about the abuse. While on the face of it, this may sound like a highly confronting scenario to relate to a child – however, it is written in such a way as to be a non-threatening and a ‘comfortable reading’ experience for parent and child. It also has an important message for adults – about listening to and believing children and being perceptive enough to pick up on signals when something is wrong. Sir Alfred, a brave little knight, and his mother Lady Susan (who has fallen on hard times) works as a cleaner at the castle of the rich and famous Lord Henry Votna. While Lady Susan works, Alfred and Sir Henry play together. At first Alfred has fun as they play and laugh, but then Sir Henry begins to touch and tickle Alfred’s private parts in a way that makes him feel ‘uncomfortable and sick inside’. When Alfred asks him to stop, he refuses, and forces Alfred to keep the ‘tickling game’ a secret by threatening to fire his mother if he tells anyone. Poor little Alfred is confused, frightened and very worried. He explains to his mother that he doesn’t want to play with the Lord any more, but she tells him not to be so silly as he’s such a kind man that everyone loves. One night, Lady Susan overhears her son sobbing in his bed, and she comforts him and gently explains that there is nothing that he can’t tell her, and ‘some secrets should never be kept’. Encouraged by his mother’s patience and kindness he finds the strength to tell her what has been happening. She reassures him that he has been very brave by telling her and that he has done the right thing, and promises him that he will never have to see Lord Henry again. The Lord is banished from his kingdom as a punishment, and Lady Susan easily finds other work. The story ends with little Alfred tucked up safe and warm in his bed, feeling proud of himself that he found the courage to tell his mother. Further information on this book, including notes for parents and teachers, can be found here: http://somesecrets.info/

This video link is provided to help an adult assess the book's suitability for a child's situation before purchasing it. It has been filmed by a third party and hosted on YouTube and is not made by Little Parachutes. More info
Review by: Claire Ward-Dutton