A picture book which acknowledges that getting used to wearing glasses can be a challenge for some children. The boy in the story ultimately grows to accept them. 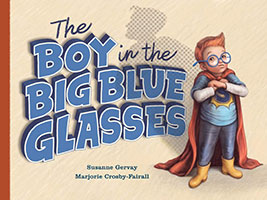 Sam doesn’t like his new glasses. They make his ears hurt. His parents say he looks handsome in them. But Sam just wants to look like himself. His teacher doesn’t recognize him; she says he must be a new superhero. But Sam doesn’t want to be a superhero. He just wants to be himself. At least his best friend George recognizes him and thinks he looks okay. Sam does everything he can to lose his glasses but they keep being found. And then things get even worse, and Sam has to cope with googly-eyed turtles and giant penguins! Eventually, with a bit of confidence and a lot of humour, Sam finds out that wearing glasses isn’t so bad – and people still like him just the way he is after all.

A super book that has been carefully and skilfully created to comfort and reassure children who are finding it difficult to adjust to wearing glasses. The story is narrated by the protagonist Sam in a tone you would expect from a young boy. The beautiful illustrations by Marjorie Crosby-Fairall really breathe life into the characters.