The Bravest Fish is a delightful book that follows the journey of a little fish, Stanley, after he is separated from his school and fish family. The book follows Stanley’s journey through the ocean to find his family. The story highlights the importance of being positive, never giving up and harnessing strength and bravery. 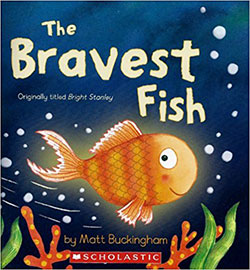 “I can’t stay in here forever.”

Stanley is a brave little fish who lives with his school and fish family deep under the sea. As the weather begins to turn warmer, Stanley’s school and family swim away in search of warmer waters. The only problem is Stanley sleeps in and is left behind. He rushes to their meeting point, but there is no one to be seen.

Stanley sets out on a journey to find his fish family. Along the way, he meets some interesting creatures including a lobster and the Big Shark.

After a long journey, Stanley seeks refuge in a dark cave. He takes a brave step by leaving the cave and is finally reunited with his family.

The focus of the story surrounds the theme of separation from family and friends. Some children may find this distressing if they have strong negative associations with these experiences or emotions.

The scene where Stanley meets the big shark may also potentially frighten some children.