This book encourages children to care for and protect the environment that surrounds them, and shows that children can make a difference. 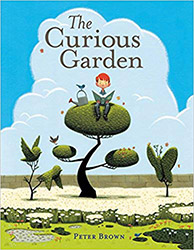 “There once was a city without gardens or trees or greenery of any kind…As you can
imagine, it was a very dreary place.”

A young boy named Liam took delight in wandering outside. He loved splashing through puddles in the rain. During one of his rainy day adventures, he decided to explore the railway. There he discovered a small neglected garden struggling to survive near the railway tracks. Every day since then, Liam visited the plants and wildflowers and watered them, trimmed them, and sang to them. Soon, Liam became a real gardener and the plants grew into a real garden. Unlike most gardens, the curious garden wanted to explore. The railway tracks were soon covered by plants.

When winter came, Liam studied gardening and prepared to garden in the spring. With the help of Liam’s new tools and sunshine, the garden awoke and moved into the city. It grew around old and forgotten things abandoned on the streets. It grew on post-boxes, water hydrants, and many other mysterious places. Soon, the entire city was covered in plants. The most wonderful thing happened next spring: the garden turned the city’s residents into gardeners.

The picture book begins with grey illustrations and description of dull and gloomy city life where there are no gardens. The illustrations depicting the growth of the garden are bright and colourful. They draw the reader’s attention to the contrast between the polluted city and the curious garden, the consequences of environmental destruction and necessity for environmental preservation.