Children who are afraid of the dark may find comfort and acknowledgement here, but the story also explores themes of power, revolution, manipulation and acceptance which older children might enjoy discussing. 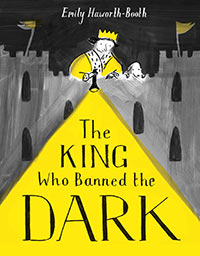 A King, who has been frightened of the dark since childhood, decides he wants to ban it. His advisors suggest that the best way to get his people to accept the ban is to make them believe it was their idea. So they set about spreading negative rumours about the dark. The plan works, and the people embrace the King’s ban wholeheartedly. But soon the novelty of all-night partying under artificial lights (including an enormous electric sun) begins to wear off as the people realise they can’t sleep under the glare of all those lightbulbs.

To re-kindle the exhausted townsfolk’s enthusiasm, the advisors plan a huge celebration with fireworks (seemingly unaware that fireworks can’t be seen in daylight). The people hatch a rebellious plot to switch off the lights and manage to see this through….just in time for the fireworks to begin. Which, of course, are so beautiful and inspiring that the King finally realises the error of his ways.

As ‘The Emporer’s New Clothes’ proves, children delight in recognising people in power acting in foolish ways, and this book is no exception. Our test readers enjoyed the story and became absorbed in the behaviour of the King; how could he not have realised that banning the dark wasn’t going to work? Our older readers picked up on some of the more political messages woven through the story: how people can be manipulated with misinformation and how prejudices can be played upon.

Emily Haworth-Booth has created a bit of a masterpiece here: an intriguing and compelling story that is complimented by delightful illustrations.