Reassuring children who are afraid of the dark or anxious about monsters. 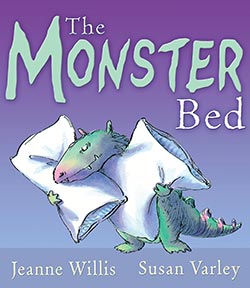 Dennis doesn’t want to go to sleep because he’s frightened that there might be something under his bed. But in a twist to the usual tale, Dennis is a monster and he’s afraid that there are humans lurking in the dark. His mother tells him that humans only exist in stories, but Dennis doesn’t believe her. He decides to sleep underneath his bed so that the humans won’t be able to find him. A small boy gets lost in the woods, and finds the cave where Dennis and his family lives. Tired and scared, he curls up on Dennis’ bed, wishing his mummy was there to kiss him goodnight and to check for monsters under the bed. In her absence he checks under there himself…and the boy and the monster meet face to face! Both are equally terrified, and run away. The last illustration shows Dennis cuddled up on his mum’s lap with a cup of steaming cocoa.