This simple and powerful story about the arrival of a stranger could be a catalyst for exploring so many concepts and themes with young children: trust, curiosity, tolerance, hope, kindness, making amends, friendship, ‘doing the right thing’ and telling the truth to name just a few. 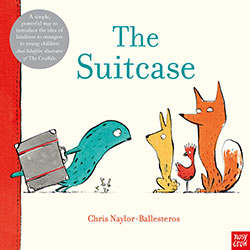 A strange animal arrives after a long and tiring journey. The local animals (a rabbit, fox and bird) are curious about what’s in his suitcase. The stranger tells them that there’s a teacup, table and chair and a little wooden cabin inside where he makes his tea. Fox, in particular, is very suspicious…can the stranger be trusted? How do they know he’s telling the truth? While the strange animal sleeps off his exhaustion and dreams of scaling mountains and crossing deep waters, fox decides to break open the suitcase to reveal a smashed teacup and a photograph of a strange animal drinking tea in front of a cabin. When the stranger wakes he is surprised to find that the animals have been busy mending his cup and making him a new cabin, table and chair. The story closes with the animal extending the hand of friendship: (“we’re going to need more teacups”). 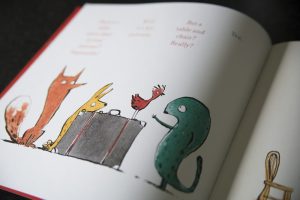 This simple story could be a catalyst for exploring so many concepts and themes with young children – trust, curiosity, tolerance, hope, kindness, making amends, friendship, ‘doing the right thing’ and telling the truth to name just a few. The local animals all have distinct personality traits: bird is curious, rabbit is sympathetic and fox is suspicious. There are some clever touches in the illustrations; the painted colours of the newly-constructed cabin mirror the colours used to paint each animal, offering a powerful symbol of acceptance and friendship. Chris Naylor-Ballesteros has beautifully captured the sheer physical and emotional exhaustion of the strange animal in the illustrations, something that will surely be recognised by children and could trigger a conversation about empathy.

Worth noting: While the story carries the theme of acceptance and tolerance of new people,  safety and protection messages which we relay to children (such as ‘stranger danger’ and ‘clever never goes’) may seem at odds with this. As adults we understand that these two important messages apply to different situations, but a child may be confused. We feel it is worth clarifying this with a conversation after sharing the story.