This book may help children come to terms with childhood worries and encourage them to admit mistakes and tell the truth. 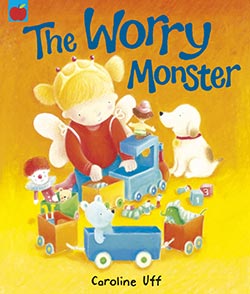 Sally ‘accidentally’ eats all the chocolate cake, and rather than admit it, she blames her beloved dog Eric. Eric is sent to his kennel in disgrace. That night, a tiny monster appears in Sally’s room (her ‘worry monster’) and stays all night, preventing her from sleeping well. The monster is still there in the morning, following her to school and growing larger all the time. It makes a nuisance of itself, spoiling her paintings and eating her lunch, and refuses to go away. Staying busy with favourite activities makes the monster disappear for a while, but that night it appears in Sally’s lovely dream about fairies and frightens her. Mummy comforts her as she wakes from this ‘bad dream’ and Sally tells her about the monster. Mummy explains that she also had a ‘worry monster’ when she was a child, and telling someone about your worries often makes them go away. Sally confesses to the chocolate cake incident, and immediately starts to feel better and worry less. She plays happily with Eric and bakes a new cake with Mummy. The monster only comes back once more, and he is so tiny and comical that Sally can’t stop laughing at him. The more she laughs the smaller he becomes, and eventually Eric chases him away completely and he disappears with a ‘pop’.