This entertaining book explores the idea of 'being different'. The central character has less conventional looks than his classmates, but the story reveals that his kindness and intelligence are more important than the way he looks. The book also has an anti-bullying message. 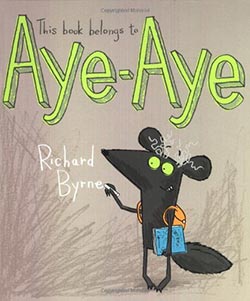 The hero of the story is Aye-Aye (an Aye-Aye is a rather curious-looking animal that lives in the forests of Madagascar). His ambition in life is to appear in a picture book (he does, after all, attend Miss Deer’s Academy For Aspiring Picture-Book Animals alongside a variety of creatures). However, Aye-Aye is not the usual cute and fluffy animal found in picture books. When Miss Deer announces that she is running a competition to find the most helpful animal in the class, Aye-Aye is hopeful that the prize will be what he longs for the most. Following what appears to be Miss Deer’s instructions for the competition, the classmates set about trying their best to be helpful, creative, sporty and cute. It soon transpires that there are two saboteurs in the class (the fluffy Rabbit twins) who are trying to prevent the other animals winning the prize. Despite their attempts to disrupt him, Aye-Aye manages to show Miss Deer how helpful and inventive he can be. Miss Deer punishes the rabbits for cheating (they are told to clean the classroom) and Aye-Aye is awarded the prize: a shiny cup. He is rather disappointed, until Miss Deer begins reading the class a new story, all about Aye-Aye and how he wins a competition…

Delightful contemporary illustrations with lots of details to pore over. Children will love the clever circular story, and will enjoy spotting the sneaky goings-on of the Rabbit Twins before the teacher does!

The rabbits finally see the error of their ways and apologise to Aye-Aye. The three become friends.