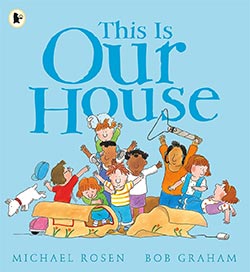 The story is set in an urban environment, in a playground surrounded by high-rise buildings. All the characters are children. George has installed himself in ‘the house’, which is a large cardboard box with windows cut out of it and an aerial on top made from a wire coat hanger and a cardboard tube. He tells the other children that the house is for him alone. Lindy explains that it in fact belongs to everyone, but George won’t listen. The children all try different persuasion techniques to gain entry: Freddie wants to put his toy rabbit to bed, Charlene and Marlene want to come in and mend the fridge and Luther wants to rescue his jumbo jet (which has crash landed into the box). Each entry attempt is met with refusal from George (who declares that small people, twins, people with glasses, and so on are not allowed in. George really needs to go to the toilet and is forced to abandon his post in the house. Despite his strict instructions to stay away, the opportunistic children gain entry the moment his back is turned. When George returns, there is no room for him in the now crowded house and Charlene informs him “This house isn’t for people with red hair” (George is a redhead). He stamps, shouts, cries and kicks the wall, then stops and looks. In a moment of realisation, he declares that the house is for everyone: girls, small people, twins, people who wear glasses and like tunnels….and people with red hair. All the children shout together, “THIS HOUSE IS FOR EVERYONE!”

This video link is provided to help an adult assess the book's suitability for a child's situation before purchasing it. It has been filmed by a third party and hosted on YouTube and is not made by Little Parachutes. More info
Review by: Claire Ward-Dutton