A brilliant book that puts the reader in the shoes of a child in poverty, acknowledging the frustration and sense of injustice a child feels when they can’t have the things their friends take for granted. 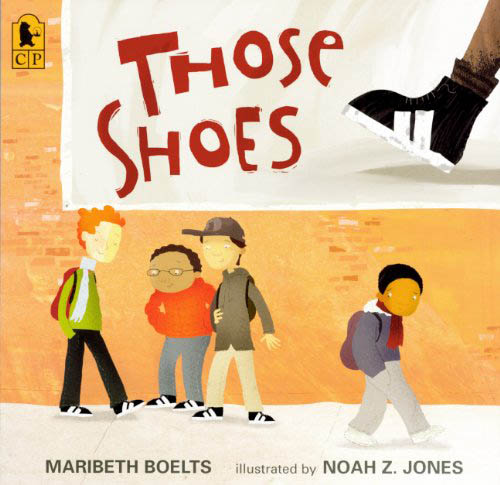 “I have dreams about those shoes. Black high-tops. Two white stripes.”

It’s easy for adults to dismiss a child’s obsession with owning the latest pair of trainers as an unnecessary indulgence. But to the child, they can be a way of feeling that they ‘belong’ to their peer group. A child living in poverty may feel excluded and humiliated if their family can’t afford things that other children have, and this book skilfully reflects and acknowledges this.

It seems as if every child at Jeremy’s school has the shoes he desperately wants, but can’t afford (as his grandmother points out, “there’s no room for want around here – just need.”) When his shoes fall apart, a teacher donates an old (desperately uncool) pair from the box kept aside for ‘kids who needs things’. Jeremy feels humiliated and even more isolated. Only one child in the class doesn’t laugh at his babyish shoes: Antonio Parker (a kid who also wears old tatty footwear, held together with tape). Jeremy and his grandma find a pair of the coveted shoes in a thrift store, and Jeremy convinces himself that they fit him well and buys them with his pocket money, despite the fact that they are painfully ill-fitting. Back at school. Antonio and Jeremy get to know each other better, and Jeremy decides (after much conscience-wrestling) to pass his beloved high-tops on to his new, smaller-footed friend.

Maribeth Boelts has breathed life into the character of Jeremy and it’s easy as the reader to understand just how he feels; his frustration and resentment, and the injustice, imbalance and powerlessness. It would have been easy to create a central character that was a martyred angel, but she has not fallen into this pitfall. Jeremy struggles with his conscience and feels guilty for wanting something he knows his family can’t afford. He feels like a real boy in a situation that sadly many other children find themselves in, relying on food banks and thrift stores.

Simply illustrated in a deceptively thoughtful way, with a tone that is just right. Highly recommended.

It’s implied that Jeremy is cared for my his grandmother – no mother or father is mentioned.

This book was kindly donated by one of our generous supporters. Find out ways you can support the project here