This story shows how one child copes with his own differences, and other people’s reactions to them. The reader will find comfort in Auggie’s imaginative tactics, and his positivity about being able to change the way others see him. 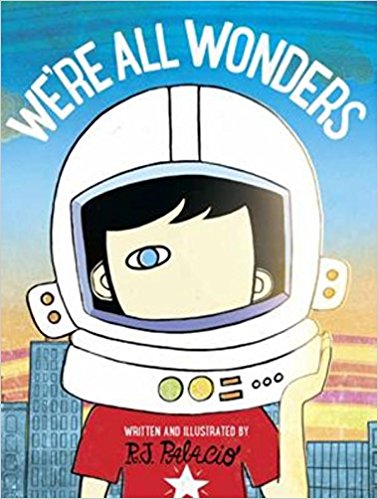 This book tells the story of Auggie, a boy with only one eye, from his own point of view. Auggie knows he is different – he doesn’t explain how, but the illustrations fill us in. Yet he also knows that he likes to do a lot of the same things as many other kids, and his interests are very similar.

Auggie’s mum says he is a wonder, and his little dog Daisy thinks so, too. But some other people don’t perceive this – they only see that Auggie is different, and they can be very unkind. Some stare, some point and laugh, and some even call him names.  Auggie notices all this, and it makes him sad. His feelings are hurt, and so are Daisy’s.

When Auggie and Daisy feel this way, they put on their helmets and blast off, up through the clouds, across the galaxy and go to Pluto.  All along the way, there is a friendly little bird tagging along with them.
On the Planet Pluto, Auggie greets old friends who look like him – they also only have one eye each, and nothing else on their faces. From Pluto, Auggie and Daisy look down at the Earth, and they think about everyone down there, how different they all are, and how the Earth is big enough for all kinds of people.

Auggie knows he can’t change the way he looks, but he hopes that he can change the way people see.
Once he’s back on the Earth, the illustrations depict Auggie meeting a new friend, and reaching out the hand – or little bird, of friendship. This new friend’s smile tells us that Auggie has found someone who sees beyond his differences, and sees him as a wonder!

Because, as Auggie says, we are all wonders.

The way the little bird features on almost every page is a lovely feature, and is very significant at the climax of the story. The colourful ball also represents what Auggie and other children his age might have in common, as it is the ball that brings the new friend to him in the end. The reader will enjoy finding these things dotted throughout the book.

The way the author has created a picture book out of a larger novel is a lovely concept, meaning that the child reader can really invest in the story, now and in the future, when they’re ready to learn more about Auggie and his dog, Daisy. The illustrations are very clever and appealing, and grab the reader’s attention from the outset.

We’re All Wonders is a spin-off from R.J Palachio’s recent novel, Wonder, a chapter book aimed at older children. In this shorter, more simplistic version of the same story, we are able to meet Auggie, and understand a little about him. Then, should a child relate to Auggie, they can pick his story up in more detail later on, thus making a real connection with him.