This beautifully illustrated book written in simple rhyme is a sensitive introduction to the First World War for young children. 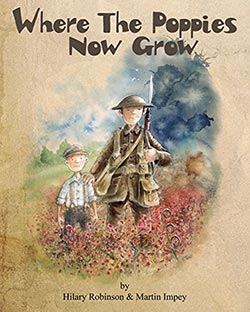 The carefree childhood of Ben and his best friend Ray becomes a distant memory when they join the army to serve their country. But, in the midst of battle can their friendship survive? Written to commemorate the centenary of the start of the First World War, Where The Poppies Now Grow is a touching tribute to honour all those who sacrificed so much in the name of peace. Aimed at children of primary school age for them to be able to, in their own way and suited to their needs, develop an appreciation and understanding of the First World War and the scale of suffering which was to shape the 20th century world.