Acknowledging some common uncertainties a child may have associated with a new baby in the house. 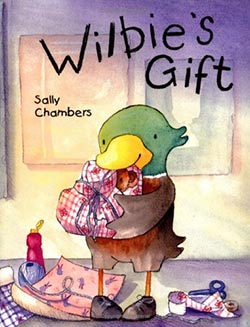 Wilbie the duck spots a pair of fantastic trainers in a shop window. He asks his Dad if he can have them, but his dad explains that they can’t afford them as soon they will have a new baby in the family. Dad suggests Wilbie saves up for the shoes instead. Wilbie is cross, and thinks he would much rather have the trainers than a new sister. He’s worried his sister will mean the family will switch to doing ‘girl’s things’, like making cakes with pink icing and playing with dolls. He’s also worried that his Dad won’t have time to play football with him anymore. As the baby’s arrival gets closer, the family get everything ready for the new baby. Wilbie realises that there’s something missing from the new nursery, and he has an idea. The baby arrives, and Wilbie thinks she is the most beautiful thing he has ever seen. He presents her with a teddy bear that he has bought using the money he’d been saving for the trainers. When the baby comes home from hospital, Dad gives Wilbie a present with a label which says, “To the best brother in the world!”. Inside were the trainers that Wilbie wanted. He thinks that both the trainers (and his new sister) are fantastic.