Challenges preconceptions that may be associated with unfamiliar situations, and promotes tolerance of other ways of life. 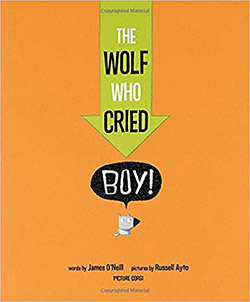 On the outskirts of a village, there lives a pack of wolves. The villagers fear the wolves, and don’t go near them. In fact, if a wolf is ever spotted, the villagers’ children are encouraged to scream and run away. Because they believe that wolves are very dangerous, as they are in all the stories. But, as it happens, these wolves are perfectly safe, and not even scary. The wolves are equally afraid of the villagers, who they envisage as ruthless, axe-wielding hunters. They encourage their cubs to stay away from the village, and roar if they see a villager approaching. One little wolf takes the pack’s advice literally, and is frequently yelling out “Boy!” whenever he gets even a little bit scared, to the point where the wolf pack no longer listens to him. But one day, when the weather is very hot, the little wolf is so pre-occupied by finding a stream to cool down in that he momentarily loses his fear. There, at the stream, he comes face to face with a little boy. This little boy is afraid of wolves, because he has heard how dangerous they are, and is often yelling out “Wolf!” when something frightens him. The villagers no longer pay any attention. So, when the wolf cub and the boy inadvertently meet, then roar and yell repeatedly at each other in fear, no help arrives. Before long, they become tired, and can’t resist taking a break in the cool water of the stream, where they lose their fear of each other, and start to play. Eventually, the wolf pack and the villagers turn up and watch, perplexed, as the youngsters interact, before dragging them off to their respective homes. The little wolf and the little boy are happy to have made friends, but are also sad because it looks like this won’t be encouraged by their elders, and they may never see each other again. The story ends on a positive note, however, because even though this unconventional friendship isn’t initially welcomed, the writer suggests that maybe, “…with a little more courage and a little less fear”, the two groups can live harmoniously, despite their differences and preconceptions about each other. This book would be helpful to a child who may feel different to others for a variety of reasons. It could help to dispel fears of the unknown, and encourage the child to see equality where once he or she may have just seen differences.

The illustrations are quirky and bright, and the different fonts make this book a feast for the eyes.