May be reassuring to children who suffer from anxiety and help them to realise that others have similar experiences. 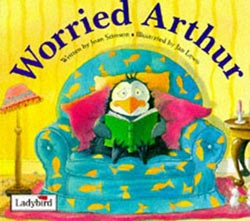 Arthur the penguin is a worrier. He worries about not gowing tall enough, he worries about his hair standing on end, and now he’s worried about Christmas. He wakes his dad up in the middle of each night leading up to Christmas with a series of anxieties. First, he’s worried that their home (The South Pole) is too far away from Santa’s home in the North Pole and Santa will have run out of presents by the time he arrives there. Next, he is concerned that Santa won’t be able to read his letter as his handwriting is messy. Then he starts fretting about snow holding up Santa’s deliveries. His father sleepily reassures him each night. On Christmas Eve his dad puts him to bed and asks him if there’s anything he wants to get off his chest. Arthur is worried that Santa might see all the toys in his bedroom and think he doesn’t deserve any more. Dad tells him that if Santa only brought presents to deserving children he would only need to work part-time! He suggests Arthur leaves a note asking Santa to put his gifts on the landing. Arthur wakes on Christmas morning and sees his bulging stocking. His dad asks him how he is and Arthur tells him he feels funny because he’s not worrying about anything!

Worth noting: The story implies that Arthur lives alone with his father.