Acknowledges that everyday situations may give rise to negative emotions in young children. The story offers some practical suggestions that young children can use to ease anxiety and frustration, such as deep breathing. 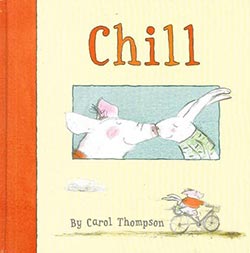 Dolly the young pig sometimes like to play alone and sometimes play with her best friend Jack Rabbit. They chatter and laugh together, sometimes playing peacefully (watching clouds or listening to music) or nosily and busily (racing, dancing and laughing). One day when they are painting together, they argue about each other’s pictures (Dolly thinks that Jack has made her look like a lumpy pumpkin and Jack thinks that Dolly has made his ears look like slimy slugs). They decide they are no longer friends and Dolly storms off towards home. Dolly and Jack’s anger slowly turns to sadness. Dolly lies on the floor and takes some big breaths (she feels like she is going to ‘explode’) then takes a warm bath, where she closes her eyes and thinks of something she likes a lot: her friend Jack. Jack also feels as if he is going to explode, so he closes his eyes and counts to ten, and lies down and breathes slowly. He thinks of something he likes a lot: his friend Dolly. The next day, they both go to their ‘Best Place’ (the same tree) and admit that they miss each other. They play happily, and after practising some yoga together they agree that they are now both ‘chilled’. The book explores simple techniques that children can use to control their anger and frustration. Carol Thompson’s scruffy and contemporary illustrations should appeal to children. The book is cartoon-like in style, making use of speech bubbles.