Provides guidance and support to children who are being parented by gay men. Encourages an appreciation of, and acceptance of, same-sex parents, and shows that families come in all shapes and sizes. Promotes a positive view of gay relationships. 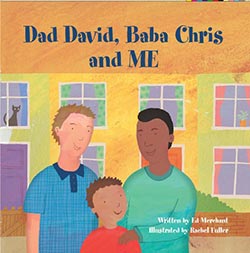 Seven-year-old Ben has a pretty ordinary life in all respects but one: he has three dads. ‘Baba Chris’ and ‘Dad David’ adopted him after his birth parents weren’t looking after him well enough. The book describes the emotional turmoil Ben experiences when he is first adopted caused by his fear of rejection and his concern for the welfare of his birth parents. His emotions manifest themselves in temper tantrums and fits of anger. Some of the children at Ben’s school tease him and call him gay. David and Chris visit the school with their son, and his teacher explains that the children are wrong to tease him and they haven’t yet learned that gay parents can love each other in the same way as their mums and dads do. Ben explains there are many positive aspects of living with two dads (cooking and playing football together, lots of help with homework) and describes how he spends time with extended family at the seaside. Ben wonders if he will grow up to be gay too, and Baba Chris explains that he will know how he feels when he’s older (but most likely he’ll find a girlfriend). However he feels, that will be OK and perfectly normal. The book concludes with Ben asking his dads if he could have a brother or sister one day. His dads decide to make enquiries into adopting another child. Ben looks forward to telling them how special they are.

Ben explains that the bullying and teasing he experiences at school continues, but now he is less affected by it as he understands why it happens. He has made lots of friends who are supportive and kind.