A useful introduction to dyslexia for children, this book reassures children that dyslexia should not be a barrier to success if it is properly recognised and managed. 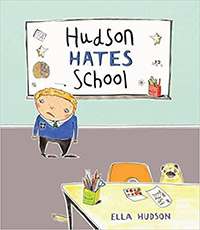 Hudson hates school, especially spelling tests. He struggles with them and has convinced himself he is ‘stupid’. His classmates laugh at him and taunt him for not being able to spell, and his teacher keeps him in at break time for extra practice. After school one day, he tearfully tells his mum he is ‘never going back to school’. His mum intervenes by calling his teacher, and Mr Shapland, a trained assessor, visits Hudson at school. Mr Shapland tests Hudson by showing him pictures with missing parts, and asks Hudson to make patterns with blocks. He explains why Hudson is finding it hard to learn as quickly as his friends: he has a learning difficulty called dyslexia. He gives Hudson lots of information about dyslexia, and how Hudson’ s brain processes information in a different way (which means it is having to work harder). The school arrange for Hudson to have some of his lessons in a different classroom with other dyslexic children. He has a new teacher for these lessons. His work really improves, and he is much happier…and actually begins to quite like school!

Hudson is a very likeable and believable character who children should relate to.

Hudson's teacher (Miss French) comes across as rather unsympathetic at the beginning of the book. She keeps Hudson in at break time when he is struggling with his spellings, which Hudson perceives as a punishment. However, it is Miss French who eventually contacts Hudson's mother (it is unclear whether it is his teacher or his mother who suggests having Hudson assessed for dyslexia).

It is very difficult for Hudson to deal with his school friends teasing him and laughing at him. He feels very hurt and ashamed, and he secretly believes that he must be less intelligent than his classmates because of the way he struggles with some schoolwork.

Hudson shows courage and honesty when he admits to his mum that he is unhappy at school. His situation improves greatly. He realises that he doesn’t really hate school (in fact, he quite enjoys it), and he makes new friends. He realises he’s not ‘stupid’.