Highlights the negative impact that bad manners and rudeness can have. Promotes the idea that if someone is polite then they will be happier and have more friends. 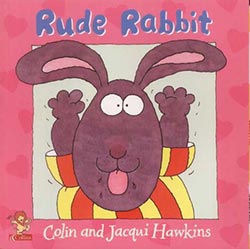 Rude Rabbit lives up to his name. He hasn’t got any friends because of his rudeness and bad manners. He burps and slurps at the dinner table, grabs sweets, pulls rude faces, shoves and pushes, and pokes fun at the other animals. Things begin to change, however, the day he meets Honey Bunny. Rude Rabbit thinks she is the most beautiful rabbit he has ever seen and falls ‘head over ears’ in love with her. But Honey Bunny doesn’t react favourably to Rude Rabbit shouting, “GIMME A KISS!” at her and just ignores him. Rude Rabbit pursues her with flowers and chocolates, but she is unimpressed with having them shoved at her and tells him to go away. Rude Rabbit is heartbroken, shocked and tearful. Daft Dog comes to the rescue and takes him to the library to borrow ‘The Big Book of Better Manners’. Rude Rabbit soon learns how not to be so rude, and all the animals notice how much nicer he has become. Even Honey Bunny tells him how polite he is! He sets up ‘The Rude Rabbit Rudeness Roadshow’ which shows everyone how they can ‘Learn in a night to be polite’. The show is a great success, and Rude Rabbit becomes the politest of rabbits (except for the occasional lapse of manners, as we see on the final illustration where Rude rabbit is shouting, “Oi!” over the fence!)

Worth noting: Honey Bunny's manners are not exemplary either, which may strike some readers as a little strange. She throws Rude Rabbit's gifts in the air and shouts at him to go away.