Nadia Shireen is an exciting new author and illustrator. Her first picture book, Good Little Wolf is proving to be a big hit with critics, parents and children alike. As well as being laugh-out-loud funny and a little bit wicked, the book explores the idea of being true to oneself and standing up to stereotypes. Little Parachutes spoke to Nadia about shyness, making it up as you go along and how law students turn into published authors. 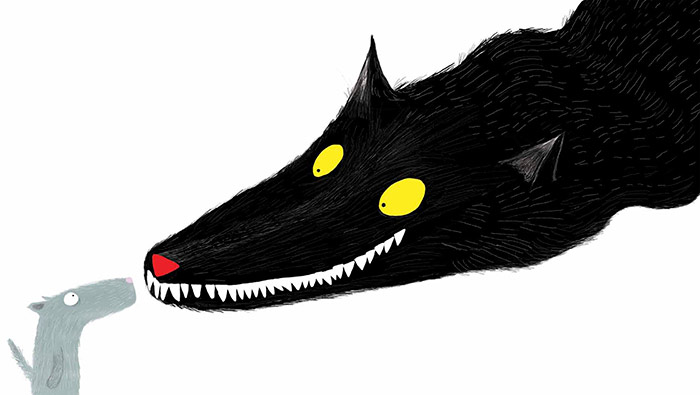 Where did the idea for Good Little Wolf come from?

I have no idea. I was doodling in my sketchbook and he just came out, looking all smug. I was working on a different story at the time, and was having problems with it. So I think my brain was trying to distract itself. Once I had the smug little wolf character, the story seemed to sort itself out.

As Good Little Wolf knows, sometimes it’s hard to go against the grain, to be different and not conform to peer pressure. As a child did you ever experience this?

I didn’t feel like I fitted in when I was young, but who does? I definitely didn’t want to be different – I was a shy, nerdy, brown kid growing up in an area where there weren’t many shy, nerdy, brown kids. I desperately wanted to fit in and be like everyone else most of the time. So maybe Rolf represents my inner rebel.

What were your favourite picture books as a child? Have they influenced your work?

I don’t remember having a favourite picture book, but I’d read anything and everything. My mum would take me to the local library a lot and I have clear memories of sitting in the children’s section and browsing for ages. I’d love anything that had funny characters drawn on them; books, comics, record sleeves, cereal packets…

How did you find the transition from law student to author and illustrator?

Well, it took about 10 years so it wasn’t a neat transition. I don’t have many memories of the law degree. I spent most of my time at University trying to blag my way into as many gigs as possible under the ruse of being a student journalist. Then I worked in magazine publishing for a few years. During that time I did an awful lot of doodling and staring out of the window, dreaming of being an illustrator. For ages I was very tentative about it all, but eventually I decided to do a part-time illustration course. I felt that at best, I’d get that yearning to be an illustrator out of my system. Happily, it’s all worked out rather differently.

Please tell us a little about the graphic techniques you have used in the book.

I make it all up as I go along. In some instances, I’ve drawn stuff in my sketchbook and then scanned it in to my computer and fiddled about with it. I also bought the cheapest graphics pen and tablet available and I draw with that. I don’t use Photoshop ‘properly’ and that’s probably a good thing, because it means I don’t get carried away with using all the fancy digital effects available to me. Instead it all looks a bit scrappy, which is how I like it.

We love the humour within the book, especially the twist at the end as the supposedly reformed Big Bad Wolf eats the other characters. What reactions do you get to this dark humour? Do children react in the same way as adults?

Most people like it, but I have had a couple of people who go, “Oh… OH NO!” They try not to look horrified. I’m sure they think I’m a terrible, twisted person – but hey, nobody’s perfect. I haven’t met any traumatised kids yet, but there’s still time.

Do you have other projects in the pipeline?

I’ve illustrated a book called The Baby That Roared, which will be published by Nosy Crow early next year. And I’m currently working on my second book as an author/illustrator, which will hopefully be out next summer.

This site uses Akismet to reduce spam. Learn how your comment data is processed.